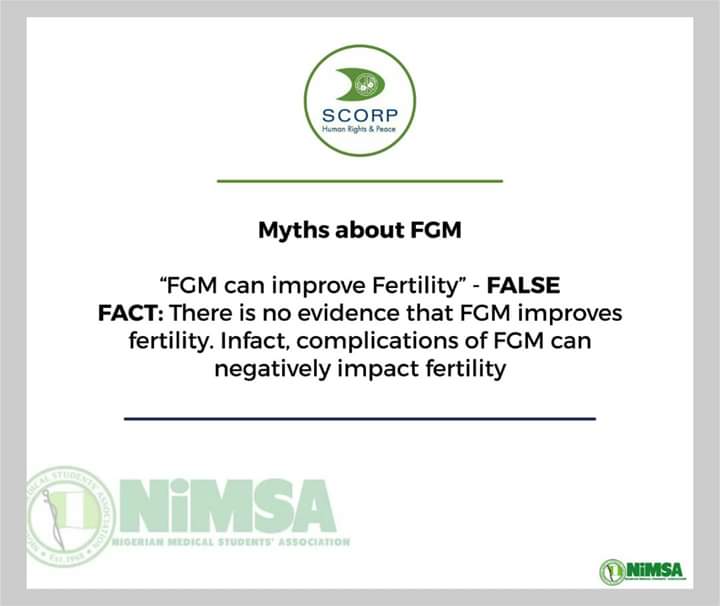 It is quite surprising that regardless of the modern day civilization and the widespread advancements in all areas of life, a bunch of people still engage in this evil called Female Genital Mutilation. No matter how interesting the reasons are, one begins to wonder what possible justification there is for cutting of the external genitalia( Some call private part) of a female for no medical reasons?

FGM is practiced worldwide and has been recognized as an infringement on the human right of girls and women, as well as infringement on the right to health, security and physical integrity and a lot more. It is practiced in about 28 to 30 countries in Africa and a few nations around the world. Its prevalence has been found increasingly in African countries such as Nigeria, Egypt, Mali, Central African Republic, and Sudan etc.

FGM is a widely practiced in Nigeria and has been found to be more predominant in Nigeria as a result of its large population, its highest prevalence being in the south-south and the lowest in the North.  A few organizations have continually worked towards the eradication of FGM and a few of them are WHO, Federation of International Obstetrics and Gynecology (FIGO), African Union and a lot of women organizations.

It is important to note that FGM has no benefits to the health of individuals upon which it is performed and medical professionals are strongly advised not to perform these procedures. It is usually carried out by traditional circumcisers mostly on girls between the infancy and the age of 15. There are a lot of controversies as regarding the origin and significance of FGM, as some do it as a sign of an initiation   ritual of young girls into womanhood while others, as a way to restrain girls from promiscuity and protect or retain virginity.

Female Genital is carried out in different types which have been categorized generally into four, and they include –

Type I:  This is also called Clitoridectomy. It is the partial or complete removal of the clitoris (the small, erectile and sensitive part of the female genitals) and in some cases the prepuce.

Type II:  This is also referred to as Excision. It involves the partial or complete removal of the clitoris this and the labia minora. This could be accompanied with excision of the labia majora in some cases.

Type III: This is also referred to as Infibulation. It involves reduction of the vaginal opening by creating a cover seal. This seal is usually created by cutting and altering the position of the labia minora, or labia majora. This is sometimes done through stitching and in some cases with removal of the clitoris.

Type IV: This simply refers to any other harmful procedure done to the female genitals for non-therapeutic or non-medical purposes. Some of these procedures include; incisions, piercing, pricking etc the genital area.

Type I and type II are more common, but are less harmful compared to type III and type IV. In Nigeria, Type I has been found to be more prevalent in the south while the severe forms are found mostly in the North.

It has been stated earlier that FGM has no health benefits. It has been seen only to cause damage to health both physically and psychologically. The removal of healthy female tissues interrupts the normal functions of girls and women’s’ bodies, affects health and prevents them from performing normal functions such as sexual intercourse and childbirth. These procedures cause both immediate and long-term complications to the individuals involved.

Infections such as tetanus.

Need for surgery later in life to allow for sexual intercourse or for childbirth.

FGM even with conscious effort to eradicate it, has still eaten deep into our society today. It has been seen to be a pliable example of sex-based discrimination. This has been a way, adopted traditionally to control women’s sexuality and for the determining how marriageable girls are.  Efforts by different organizations through public lectures, medical outreaches and so on, have been and are still made to enlighten people about the cons of FGM and the effects it has on the girl child and women in the society. Ways through which FGM can be eliminated includes.

Setting up federal laws against FGM in Nigeria.

Creating awareness about the complications of FGM, especially in rural areas.

Become a part of something bigger than you.